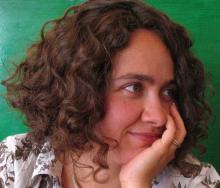 Multiple cellular processes such as replication, recombination, and packing change the topology of DNA. Controlling these changes is key to ensuring stability inside the cell. The cell uses enzymes to simplify DNA topology. Techniques from knot theory and low-dimensional topology, aided by computational tools, now make it possible for us to study the specific action of such enzymes in these processes. I will illustrate the use of these methods with examples drawn from my ongoing study of DNA unlinking after replication in bacteria.

Mariel Vazquez is an Associate Professor at San Francisco State University. After obtaining her bachelor’s degree from the National Autonomous University of Mexico, where she began working on knot theory, she continued her studies in this area in the group of DeWitt Sumners at Florida State University, where she received her Ph.D in mathematics in 2000. From 2000 to 2005, she held appointments as a postdoctoral fellow and a visiting Assistant Professor at UC Berkeley, where she studied chromosomal rearrangements in radiation cytogenetics and cancer. Her current research focuses on the applications of topological and discrete methods to the study of DNA, with an emphasis on the topological changes affected by enzymes such as topoisomerases and site-specific recombinases. She is the recipient of an NSF CAREER Award (2011) and the PECASE Award (2012) for interdisciplinary international research at the interface of mathematics and biology, and for her contributions to recruiting, training, and mentoring underrepresented students. She has served on the Advisory Board the National Institute of Mathematical and Biological Synthesis, and is currently associate editor of the newly-formed journal Frontiers in Molecular Biosciences.