The 2017 ShanghaiRanking places UCSB at No. 3 in the world in the field of automation and control

With smart homes, self-driving cars and other technology making the world an ever more automated place, state-of-the-art automation and control has become essential. And UC Santa Barbara is among those leading the way.

In its Academic Ranking of World Universities’ (ARWU) 2017 global ranking by academic subjects, the ShanghaiRanking places UCSB at No. 3 in the world in the field of automation and control, just behind University of Illinois at Urbana-Champaign and Massachusetts Institute of Technology.

“This is a wonderful recognition of the important, first-rate work our distinguished colleagues are doing, and such recognition brings prestige and distinction to the entire college and our campus,” said UCSB Chancellor Henry T. Yang.

The beauty of automation and control lies in its invisibility: If things are working well, people usually don’t notice. Automation and control makes trains run on time, directs stoplights to change from green to yellow to red, lets our cars know when to switch gears and is responsible for making sprinklers come on to douse the flames when a fire breaks out in a room. Automation and control makes our world run smoothly and safely, encompassing a variety of fields, including aviation, transportation, biomedical applications and virtually every situation in which a machine must sense and respond to variable input with minimal human intervention.

At UCSB, experimental and theoretical work in automation and control is pursued on several fronts. Among them are the dynamics and control of airplane and space structures; control of building structures due to earthquakes and winds; control of switched and discontinuous systems and automatic drive-train control.

More than 4,000 universities were ranked across 52 subjects for the 2017 ARWU list. Indicators include measures of research productivity, research quality, extent of international collaboration and research with top quality and the highest academic recognitions.

“This is great news confirming the outstanding quality of our program in control and automation, an area of increasing importance to improving quality of life in our technologically complex world,” said UCSB College of Engineering Dean Rod Alferness. “The fact that the ShanghaiRanking group has chosen to highlight this field and rank our program number three in the world validates our vision of investing in such cutting-edge, high-impact areas of endeavor."

The full 2017 Shanghai Ranking in Automation and Control can be found at http://www.shanghairanking.com/Shanghairanking-Subject-Rankings/automation-control.html

Tour of the Controls Lab at UC Santa Barbara

Justin Pearson gives a tour of the undergraduare controls lab at UCSB for incoming first-year undergraduate students in Electrical and Computer Engineering and plays around with an inverted pendulum.

Researchers at UC Santa Barbara professor Yasamin Mostofi’s lab have given the first demonstration of three-dimensional imaging of objects through walls using ordinary wireless signal. The technique, which involves two drones working in tandem, could have a variety of applications, such as emergency search-and-rescue, archaeological discovery and structural monitoring.

“Our proposed approach has enabled unmanned aerial vehicles to image details through walls in 3D with only WiFi signals,” said Mostofi, a professor of electrical and computer engineering at UCSB. “This approach utilizes only WiFi RSSI measurements, does not require any prior measurements in the area of interest and does not need objects to move to be imaged.”

The proposed methodology and experimental results appeared in the Association for Computing Machinery/Institute of Electrical and Electronics Engineers International Conference on Information Processing in Sensor Networks (IPSN).

In their experiment, two autonomous octocopters take off and fly outside an enclosed, four-sided brick house whose interior is unknown to the drones. While in flight, one copter continuously transmits a WiFi signal, the received power of which is measured by the other copter for the purpose of 3D imaging.

After traversing a few proposed routes, the copters utilize the imaging methodology developed by the researchers to reveal the area behind the walls and generate 3D high-resolution images of the objects inside. The 3D image closely matches the actual area.

“High-resolution 3D imaging through walls, such as brick walls or concrete walls, is very challenging, and the main motivation for the proposed approach,” said Chitra R. Karanam, the lead Ph.D. student on this project.

This development builds on previous work in the Mostofi Lab, which has pioneered sensing and imaging with everyday radio frequency signals such as WiFi. The lab published the first experimental demonstration of imaging with only WiFi in 2010, followed by several other works on this subject.

Their previous 2D method utilized ground-based robots working in tandem, the success of the 3D experiments is due to the copters’ ability to approach the area from several angles, as well as to the new proposed methodology developed by her lab. 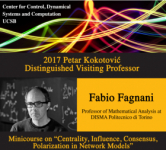 The Center for Control, Dynamical-Systems and Computation proudly hosted guest Fabio Fagnani, Professor of Mathematical Analysis from DISMA Politecnico di Torino, as the 2017 Petar Kokotović Distingished Visiting Professor. Prof. Fagnani visited the Center during the weeks of Monday May 8th and Monday May 15th. He delivered a four-part mini-course on his research and educational work entitled “Centrality, Influence, Consensus and Polarization in Network Models.” The four talks were scheduled as follows:

Thursday, May 11th at 11:00am in Harold Frank Hall 1132 – “Centrality, Influence, Consensus and Polarization in Network Models.”

Friday, May 12th at 3:00pm in Webb 1100 – “From opinion dynamics to randomized network algorithms”

Tuesday, May 16th at 11:00am in Harold Frank Hall 1132 – “Fragility and resilience in centrality and consensus models"

Wednesday, May 17th at 11:00am in Harold Frank Hall 1132 – “When consensus breaks down: influential nodes, dissensus, and polarization.”

The mini-course brilliantly surveyed a modern and exciting research field closely related to research topics of interest to many graduate students. There was a large attendance at each seminar, including faculty and students from the Computer Science, Mathematics, Mechanical Engineering and Electrical and Computer Engineering departments. Professor Petar Kokotović also attended the seminars and met personally with Fabio to congratulate him and recognize his manifold contributions to the field. Multiple one-on-one meetings with Prof. Fagnani were also highly beneficial for students interested in his field of study and are likely to result in research paper submissions.

Finally, an informal reception was held on Thursday, May 18th at the Mosher Alumni Hall Sky Terrace to thank Prof. Fagnani for his kind visit and for such an interesting and beneficial mini-course. Faculty and students from all of the above mentioned departments came, as well as Fabio’s wife, Petar Kokotović and his wife Anna, and some of his friends and former colleagues. This event served as a great opportunity to celebrate the legacy of Prof. Kokotović and his contributions to the Controls field.

NASA’s Jet Propulsions Labortory (JPL) designed and built RoboSimian while UCSB’s Robotics Lab, led by Katie Byl and graduate students Brian Satzinger and Chelsea Lau, helped write the software to control how the robot moves. With an ape-like body and spider-like limbs, RoboSimian is a slow but incredibly strong robot designed to offer lots of torque. Each limb can function both as a leg or an arm, which have extremely strong, pincher-like hands able to grab onto things securely enough to support its own weight.

Paired against 22 other robots in the DARPA Robotics Challenge, RoboSimian took fifth place and was one of only two robots to not require human intervention during the course. Each robot is put through a series of tasks, including driving a vehicle through a slalom course, cutting a hole in a half-inch-thick panel of drywall using a cordless power drill, and walking up a set of stairs. DARPA officials, to better simulate the disorientation of a true disaster situation, also incorporated surprise obstacles and tasks each day. The contest is designed to simulate a “rescue scenario” in which robot are used because the environment is too hazardous for human intervention. This challenge comes as a result of the hazardous conditions and devastation to Tohoku, Japan after the 2011 earthquake and tsunami.