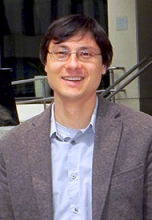 Natural populations can suffer catastrophic collapse in response to small changes in the environment, and recovery after such a collapse can be difficult. We have used laboratory microcosms to explore theoretically proposed early warning signals of impending population collapse. Our experimental yeast populations cooperatively break down the sugar sucrose, meaning that below a critical size, the population cannot sustain itself. The cooperative nature of yeast growth on sucrose makes the population susceptible to the spread of "cheater" cells, which do not contribute to the public good and reduce the resilience of the population.

Is Associate Professor of Physics at the
Massachusetts Institute of Technology.
He has wide- ranging research
interesting from ecological dynamics to
single-molecule research. His biophysics
laboratory uses microbial populations to
experimentally probe fundamental ideas
in theoretical ecology and evolutionary
systems biology.
Jeff's recognitions and honors include an NIH New Innovator Award, NIH
K99/R00 Pathways to Independence Award, and an NSF CAREER
Award. He is a Pew Scholar in the Biomedical Sciences, a Sloan
Research Fellow, and an Allen Distinguished Investigator. He has also
been recognized at MIT for his efforts in teaching and mentoring; in 2011
he was chosen as the MIT-wide undergraduate research (UROP) mentor
of the year and in 2013 he received the Buechner Teaching Award from
the Physics Department.