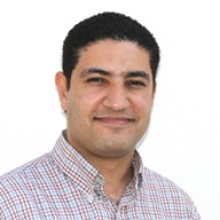 Birds and insects inspire engineers to design flapping-wing micro-air-vehicles (FWMAVs) that are able to perform D3 (dull, dirty, and dangerous) missions in confined and highly constrained areas. A FWMAV represents a complex multi-disciplinary system whose analysis invokes the frontiers of the mechanical and aerospace engineering disciplines. From the aerodynamic point of view, a nonlinear, unsteady ﬂow is created by the ﬂapping motion. In addition, unconventional contributors, such as the leading edge vortex, to the aerodynamic loads become dominant in ﬂight. On the other hand, the ﬂight dynamics of a FWMAV constitutes a nonlinear, non-autonomous dynamical system; specifically a time-periodic system. Furthermore, the stringent weight and size constraints that are always imposed on FWMAVs invoke design with minimal actuation, which results in an under-actuated dynamical system. In this presentation, I will show some of the above technical challenges and the approaches adopted to resolve them. In particular, I will show our development of an analytical unsteady aerodynamic model that accounts for arbitrarily unconventional lift mechanisms, such as the leading edge vortex. I will also show the necessity of combining geometric control theory and averaging to perform higher-order averaging for an appropriate study of flapping flight dynamics. Finally, I will discuss our proposed design methodology for the actuation mechanism that makes use of the saturation phenomenon to provide the required kinematics for both of hovering and forward ﬂight using only one actuator.

Haithem Taha is currently an assistant professor in the department of Mechanical and Aerospace Engineering at the University of California, Irvine. He received his PhD degree from the Engineering Science and Mechanics department at Virginia Tech simultaneously with an MSc degree in Interdisciplinary Mathematics in Dec 2013. He earned his BSc and MSc degrees in aerospace engineering from Cairo University, Egypt in 2005 and 2008, respectively, then, joined the German University in Cairo as an instructor for automatic control and then Virginia Tech in 2010 to start his PhD study. His PhD research has focused on aerodynamic modeling, flight dynamics and control of flapping wing micro-air vehicles. Mr. Taha has wide research interests that cover Geometric Nonlinear Control Theory and Unsteady Nonlinear Aerodynamics with application to Flight Dynamics of Flapping-Wing Micro-Air-Vehicles.