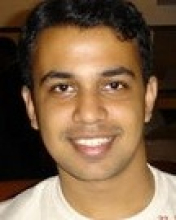 With continual advancement of numerous technologies, multiple classes of smart devices and vehicles are being developed and improved around the world that promise several novel applications. Notable examples of these are robotic surveillance of large environments, smart mobility and transportation, brain activity monitoring among humans, disease monitoring and control, to name a few. A common theme among these applications is the ecient use of only a select few sensors that are expected to provide an accurate description of the underlying complex system. This motivates a natural question of how many sensors are sucient to obtain a desired level of accuracy to observe the underlying complex system? This talk will be centered on the problem of, given a linear dynamical system, how does one select a subset of the sensors such that the observability Gramian of the new system is approximately equal to that of the original system? I will rst formalize a randomized algorithm that samples the sensors with replacement as per specied distributions and will present explicit bounds on the number of samples required by the algorithm to probabilistically satisfy the Gramian requirement. I will then demonstrate how the randomized procedure can be used for recursive state estimation using fewer sensors than the original system and can yield a high probability upper bound on the initial error covariance. Finally, I will discuss some recent extensions of the randomized techniques and present future directions for this work.

Shaunak D. Bopardikar is an Assistant Professor with the Electrical and Computer
Engineering Department, and is aliated with the Center for Connected Autonomous Networked
Vehicles for Active Safety (CANVAS) at the Michigan State University. His research interests lie
in scalable computation and optimization, in cyber-physical security and in autonomous motion
planning and control. He received the Bachelor of Technology (B.Tech.) and Master of Technology
(M.Tech.) degrees in Mechanical Engineering from Indian Institute of Technology, Bombay, India,
in 2004, and the Ph.D. degree in Mechanical Engineering from the University of California at
Santa Barbara, USA, in 2010. From 2004 to 2005, he was an Engineer with General Electric India
Technology Center, Bangalore, India. From 2011 to 2018, he was a Sta Research Scientist with
the Controls group of United Technologies Research Center (UTRC) at East Hartford, CT, USA
and at Berkeley, CA. Prior to joining UTRC, Dr. Bopardikar worked as a post-doctoral associate
at UC Santa Barbara (2010-2011) during which he developed randomized algorithms for solving
large matrix games. He is a member of the IEEE Control Systems Society, has over 40 refereed
journal and conference publications and has 2 inventions led for a U.S. patent.