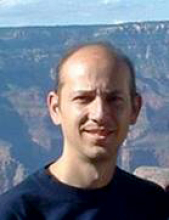 The past few decades have witnessed a significant research effort in the area of motion control for autonomous robotic vehicles. This talk addresses two topics in this area: (1) the design of control systems to drive a vehicle to track a time-parameterized trajectory (trajectory tracking), or to follow a geometric path (path-following); and (2) the problem of making a group of autonomous robotic vehicles follow desired geometric paths while keeping a specified formation pattern (cooperative path-following).

A. Pedro Aguiar received the Licenciatura, M.S., and Ph.D. degrees in Electrical and Computer Engineering from the Instituto Superior Tecnico (IST), University of Lisbon, Portugal, in 1994, 1998, and 2002, respectively. He is currently an Associate Professor with the Department of Electrical and Computer Engineering, Faculty of Engineering, University of Porto, Portugal. From 2002 to 2005, he was a Postdoctoral Researcher in the Center for Control, Dynamical-Systems, and Computation, University of California, Santa Barbara, CA, USA. From 2005 to 2012, he was a Senior Researcher with the Institute for Systems and Robotics and an invited Assistant Professor in the Department of Electrical and Computer Engineering at IST. His research interests include control systems and robotics (theory and applications) for mobile networked cyber-physical systems with particular focus on motion planning, guidance, navigation and control of single and multiple cooperative/coordinated autonomous robotic vehicles; nonlinear control and estimation theory; optimization-based and optimal control; networked control, switched and hybrid systems; performance limitations; and large-scale distributed systems. Dr. Aguiar has (co)-authored more than 200 publications in high prestigious conferences and journals in the area and is currently an Associate Editor of IFAC Automatica and IEEE Control Systems Letters.