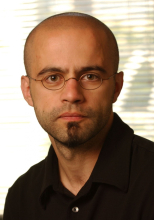 From a theoretical standpoint, special attention is given to a number of challenging problems that include the complex and nonlinear vehicle dynamics, uncertainty, disturbances, and when in cooperation, the problem of communication constraints, where the latter are imposed by intermittent failures and latency. Nonlinear control theory, model-predictive control, and networked control are some of the tools that will be discussed. Illustrative examples (simulations and field tests) will be presented for Autonomous Underwater Vehicles (AUVs), Autonomous Surface Vehicles (ASVs) and Unmanned Aerial Vehicles (UAVs).

Paulo Tabuada was born in Lisbon, Portugal, one year after the Carnation Revolution. He received his "Licenciatura" degree in Aerospace Engineering from Instituto Superior Tecnico, Lisbon, Portugal in 1998 and his Ph.D. degree in Electrical and Computer Engineering in 2002 from the Institute for Systems and Robotics, a private research institute associated with Instituto Superior Tecnico. Between January 2002 and July 2003 he was a postdoctoral researcher at the University of Pennsylvania. After spending three years at the University of Notre Dame, as an Assistant Professor, he joined the Electrical and Computer Engineering Department at the University of California, Los Angeles, where he currently is the Vijay K. Dhir Professor of Engineering. Paulo Tabuada's contributions to cyber-physical systems have been recognized by multiple awards including the NSF CAREER award in 2005, the Donald P. Eckman award in 2009, the George S. Axelby award in 2011, the Antonio Ruberti Prize in 2015, and the grade of fellow awarded by IEEE in 2017. He has been program chair and general chair for several conferences in the areas of control and of cyber-physical systems such as NecSys, HSCC, and ICCPS. He currently serves as the chair of HSCC’s steering committee and he served on the editorial board of the IEEE Embedded Systems Letters and the IEEE Transactions on Automatic Control.