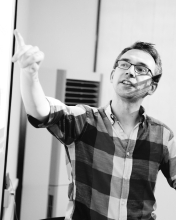 The function of many real-world systems that consist of interacting oscillatory units depends on their collective dynamics such as synchronization. The Kuramoto model, which has been widely used to study collective dynamics in oscillator networks, assumes that interactions between oscillators is determined by the sine of the differences between pairs of oscillator phases. We show that more general higher-order interactions between identical phase oscillators allow for a range of collective effects, ranging from chaotic fluctuations to sequential dynamics between patterns where frequency synchrony is localized in the network.

Christian Bick received his Diplom in mathematics from Georg-August-Universität Göttingen (Germany) in 2008. After a year at the University of California, San Diego (USA), he completed his PhD work at the Max-Planck Institute for Dynamics and Self-Organization in Göttingen to obtain his doctorate in mathematics from Georg-August-Universität Göttingen in 2012. After a postdoctoral appointment at Rice University (USA) in 2013-2014, he came to the University of Exeter (UK) as a Marie Curie Fellow (IEF) in 2015. He joined the faculty of the Mathematical Institute of the University of Oxford (UK) in 2016 before moving back to Exeter in 2018 for his current appointment.