Philip Brown is a Ph.D student from Colorado who has been working under Faculty member Jason Marden. His research focuses on the consequences of ignoring information in multi-agent systems. After receiving his B.S. in Electrical Engineering from Georgia Tech he went on to help start a biodiesel production company in Tennessee. In 2012 he went back to school to receive his M.S from the University of Colorado before transferring here to UCSB. His advisor Jason Marden writes:


“It is widely known that social systems can exhibit highly inefficient system-level behavior. Accordingly, there has been a significant research focus on the derivation of mechanisms for influencing social behavior to improve the efficiency of such systems. Philip's research has sought to address the robustness of these influencing mechanisms. More formally, is it possible to successfully influence a given social system in situations where a system-operator has uncertainties pertaining to how the actors in a society will respond to the influencing mechanisms. Focusing on the role of taxation mechanisms in transportation networks, Philip's results have identified how the information available to the system operator, pertaining to both the characteristics of the underlying network and the population's sensitivities to taxes, directly ties into the system operator's ability to do this essential task.”


Brown’s long-term goals are to collaborate with economists and computer scientists to gain a better understanding on the impact of social behavior on engineering design criteria. In his downtime he can be found on long runs or at his house making beer, wine, and bread for friends.

Read more about Philip at http://www.ece.ucsb.edu/~pnbrown/ 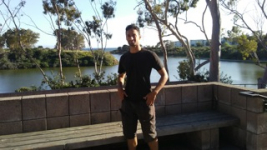 Nithin Govindarajan is a PhD student under the guidance of Igor Mezic and Shivkumar Chandrasekaran at UCSB where he studies operator theoretic methods in Dynamical systems. Recently Nithin was awarded the CCDC Fellowship for his hard work developing codes for a numerical scheme that approximates spectral properties of the Koopman operator for volume preserving dynamics on compact metric spaces.
Nithin was born in India but shortly moved to the Netherlands where he has spent most of his life. While in the Netherlands he practiced Wing Chun, a form of martial arts that takes both physical and mental discipline and perseverance to master. This discipline transferred to his personal and educational goals. Initially Nithin dreamed of becoming a commercial pilot for the Netherlands, but due to poor eyesight those dreams were cut short. Instead he earned his private pilots license and began taking aerobatic classes. At this time he also took an internship at NASA and his love for engineering skyrocketed.
Now Nithin focuses on his educational goals, working to make integral progress for the computation of spectral properties of the Koopman operator. His ultimate goal is to become an assistant professor and pass on the knowledge he has acquired to future generations.

Read more about Nithin at https://www.ccdc.ucsb.edu/content/nithan-govindarajan

Kyriakos G. Vamvoudakis was recently awarded the “International Neural Network Society (INNS) Young Investigator Award” for his pioneering engineering contributions in the area of neuro-inspired control systems and adaptive dynamic programin. By designing a family of optimal adaptive learning systems for continuous-time systems, Kyriakos was able to allow for the first time the learning solution of complicated continuous-time Hamilton-Jacobi equations that serve as the basis for optimal and game theoretic design both online and in real-time without full information of the system dynamics.


Fascinated by the idea that complicated systems can be brought under our control by manipulating mathematical equations, Kyriakos moved from Greece to the US to pursue his Electrical Engineering degree from the University of Texas, Arlington. Later he moved to UC Santa Barbara where he has been working as a research scientist under Joao Hespanha ever since. He currently teaches an undergraduate class called “Basic Electrical and Electronic Circuits” in the Mechanical Engineering Department at UCSB, and conducts research in the general area of network security, game theory, smart grids and multi-agent optimization.


Outside of the lab, Kyriakos enjoys hiking, playing the piano and exploring local restaurants. He also appreciates escaping to nearby Santa Monica or Malibu to unwind at the local beaches. He can regularly be seen at the local Coffee Bean, along with other colleagues, discussing exciting upcoming projects as well as collaborating on recent research findings. He also travels back to Greece at least once a year to visit his family and friends.

Read more about Kyriakos at https://www.ccdc.ucsb.edu/content/kyriakos-vamvoudakis

Maurice Filo is a Mechanical Engineering Ph.D student who has been working under Faculty member Bassam Bamieh. His research focuses applying control theory on spatially distributed dynamical systems. After receiving his B.S. in electrical engineering from the Lebanese University he went on to get his Master’s degree from the American University of Beirut.

Currently Maurice is working on mobile sensors in distributed stochastic environments, investigating cochlear instabilities using structured stochastic uncertainties and a preconditioned constrained gradient descent for optimal control problems. He would like to use his work to collaborate with otologists to better understand the ear from an engineering point of view. Part of the reason for his passion for control theory and dynamical systems is due to a system analysis and design course taught by professor Bamieh when he was studying in Beirut. Ultimately Maurice wants apply for a professor position.

While Maurice’s wife and family is back home in Lebanon, he gets to visit a few times a year between his studies. Outside of school and skyping with his family, he is known to play piano and study music which is part of the reason why studying the ear fascinates him. He also likes to visit with friends and walk around campus and the beach as an escape.

Read more about Maurice at https://www.ccdc.ucsb.edu/content/maurice-filo

Anantharaman Subramanian recently completed his PhD defense and dissertation at UCSB. His research centered on developing a complete Lyapunov function based on characterization of the recurrence property for a specific class of stochastic hybrid systems. Ananth earned his Bachelors degree in Instrumentation and Control Engineering from the National Institute of Technology in Tiruchirapally, moving to Santa Barbara to obtain his Masters and PhD.

Ananth chose UCSB because of the great program offered for control engineers. He joined Professor Teel’s research group and worked in collaboration with visiting research scholars and fellow graduate students, which lead to many of his contributions to the literature on stability for stochastic systems. Ananth believes that the frequent interactions with colleagues and his adviser were pivotal in gaining knowledge and understanding of new techniques and concepts. He also explains that in general, finding elegant solutions to the intricate mathematical problems he is faced with to be rewarding and fundamental for his draw toward control systems.

Ananth will be starting as a research engineer at Bosch in the near future where he plans to better develop analysis tools for studying general classes of stochastic hybrid systems. He also plans on using these tools in control design oriented problems. Outside of the lab, Ananth enjoys playing tennis with his friends and roommates as well as video games and interacting with others living at the UCSB graduate student housing.

Read more about Ananth at https://www.ccdc.ucsb.edu/content/anantharaman-subramanian