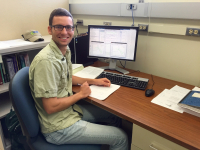 David Copp earned his Bachelor’s degree in Mechanical Engineering from the University of Arizona. He began research there with CCDC alumnus Professor Ricardo Sanfelice who encouraged David to apply to graduate school at UCSB for his Master’s and PhD degrees.

David is currently working with Professor João Hespanha on combining Moving Horizon Estimation with Model Predictive Control for nonlinear systems with output feedback. Together they have come up with a method to solve both the estimation and control problems simultaneously as a single min-max optimization problem. Applications include coordination of unmanned aerial vehicles for target tracking, estimation and control of an artificial pancreas for the treatment of Type 1 diabetes, as well as adaptive control of systems with model uncertainty.

Recently David participated in the Grad Slam, which is a campus-wide competition for the best three-minute research talk given by a graduate student. The competition allows graduate students to showcase their area of research as well as compete for a cash prize and a chance to represent their campus in a final University of California system-wide competition. After advancing through preliminary and semi-final rounds, David was selected to compete in the final round of the UCSB competition where he presented a condensed three-minute talk about his contributions towards a more effective artificial pancreas.

Outside of research David enjoys staying active, playing both basketball and ultimate Frisbee as well as hiking, biking and running. He currently lives with his wife Stacy in Goleta and plans on applying for postdoctoral research positions after the completion of his PhD.